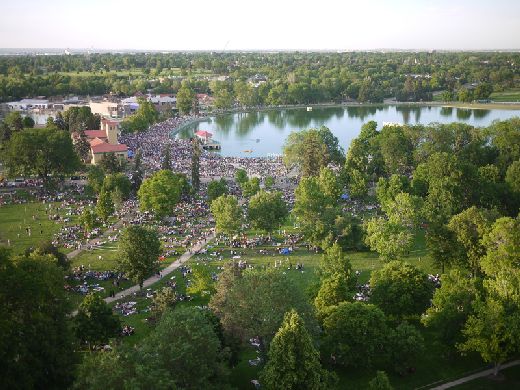 Special to Denver Direct by Dave Felice
Denver Parks and Recreation (DPR) is setting up a stakeholder group to develop what’s termed a Commercial Use Policy.  The consideration of such a policy comes after some business enterprises requested a structure to be allowed to use public park property for profit-making enterprises, such as exercise classes.
DPR’s Director of Special Projects, Dody Erickson, says the stakeholder group will consist of representatives for City Council, Inter-Neighborhood Cooperation (INC), commercial groups, Parks Advisory Board members, and DPR staff.
The policy is likely to allow commercial activity, even though it would be inconsistent with INC’s “Platform for Denver’s Urban Parks,” adopted over two years ago.  That platform opposes commercialization of public property in any form.  Many critics also still contend that commercial use violates Section 2.4.5 of the City Charter, a prohibition on “leasing” park property.
If a Commercial Use Policy is developed, some neighborhood representatives say there are several key aspects which need to be included:
–          – The city should derive the highest level of revenue possible, consistent with DPR’s cost recovery model
–          – Signage is unacceptable, even if it is temporary
–          – Activities involving animals, such as dog training, must be confined to designated “dog parks”
–          – Commercial enterprises must comply with all the same tax, licensing, and operating requirements as other fixed business establishments
There is also concern about how to set rules limiting the number and location of commercial use permits, along with determining the duration and operating hours.
Some observers say the city of Santa Monica, California appears to be taking a lead in developing a similar policy to deal with the issue.  According to The Associated Press, “City Council is considering requiring that fitness trainers who conduct workouts in Santa Monica’s parks and on its beaches pay an annual $100 fee and turn over 15 percent of their gross revenues to the city.”
Anyone with comments or concerns should contact Erickson by e-mail, [email protected].  She says the policy should be ready by February in order to set a 45-day notice for a Public Hearing by the Parks and Recreation Advisory Board in April.