Forest fires a result of cloud-seeding?

As received from Rep. McKinley 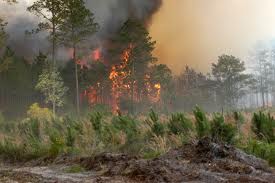 It is well known that ponderosa trees will not burn if they have enough winter moisture.
The fire in the Black Forest  in Colorado Springs is proof that all the reasonable mitigation efforts, outside of cutting all the trees within 100 feet of your home, killing all the grasses within 100 feet, will not prevent a fire from destroying 502 Homes and 14,280 Acres with two deaths.
Many of these families will receive some gratuity for their former home.  That is just a portion of their losses.   It will never be the same.  If they didn’t die in their fires, they have nothing but memories.  They have lost their pets, horses, cattle, their neighbors.  Most will never rebuild in that neighborhood.  Who would want to.