To participate, click here and register for a time slot. 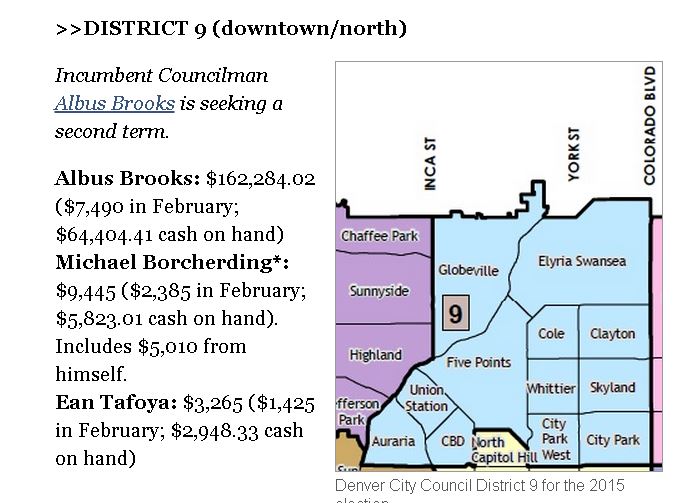 I had heard Ean Tafoya's name but never met him until our new Denver Direct producer, Bridget Walsh, arranged the following interview. Ean is running against Albus Brooks, who was switched from the old District 8 by redistricting. Brooks has raised a lot of money and will be hard to beat, especially by a newcomer like Tafoya. But Brooks also has the legacy of sponsoring the Denver No Camping ordinance which some say criminalizes homelessness

CITY COUNCIL DISTRICT 1 (NW Denver)
Candidates: Susan Shepherd, Rafael Espinoza, Malachi Martinez
Outlook: This looks like a tough two-person race between the incumbent Shepherd, who critics say has alienated her constituents, and a community activist with an interesting, if somewhat vague, resume in Rafael Espinoza.

DENVER MUNICIPAL ELECTION MAY 5, 2015 (Yikes, ballots will be out in April)

Yes, its that time already for Denver citizens to vote for candidates to run our City government: Mayor, Auditor, and some City Council members. As an interested voter, your first challenge is to figure out in which City Council District you now live. This is made more difficult by the fact that the boundaries have been redrawn, due to redistricting. Here are maps to help you figure this out.
Old Districts: If that doesn't help, you can go here and enter your address.
I was in the old 8, now the new 9. My former Council member was Albus Brooks, and he is moving to the new 9, where he will be running for "re-election" having fulfilled one term (4yrs) of his 12-year term limit.
Also running in the new 9 is Ean Tafoya, an energetic bright young man who graciously allowed us an hour-long interview. I'll be putting up snippets of the interview in this space. I've also contacted Albus Brooks for the long-overdue interview we agreed to years ago.

As people in Denver and around the world watch the documentary "CitizenFour" about Edward Snowden's disclosure of government spying on ordinary citizens, here is something else to consider.

Almost all of the information gathered by NSA snooping comes from mobile phones and computer devices. People are so fascinated or enamored of the convenience and capability of their electronic gadgets, they either do not realize or choose to ignore the fact that both legal and technical data collection requirements are much more stringent for wired landline telephones.

A cell or PCS (or home cordless) phone is a two-way radio device, broadcasting on a public frequency, just like a radio in your home or car. anyone with a good tuner can listen anytime, anywhere. It's somewhat of an oversimplification, but a wired landline telephone signal is carried by a discrete private pair of wires from Point A to Point B.

Since Alexander Graham Bell first used a functioning telephone to say "Mr. Watson, come here, I want you," in 1876, telephone workers have adhered to a strict practice of protecting the customer's privacy at all costs. Privacy protection was enacted into law by the Communications Act of 1934 and renewed by the 1996 telecomm regulation update. Even today, telecommunications workers are obligated by law to certify they understand and comply with requirements to safeguard customer privacy.

Since 9/11 and the subsequent "Patriot Act," government agencies have used the idea of "national security" as a ruse to trample many basic democratic freedoms. Remember, too, that members of both political parties enthusiastically endorsed the legislation which has little to do with patriotism. We are fortunate to retain enough freedom that more people are not simply plucked from the street for suspicion of violating "national security."

A harbormaster at an eastern seaport once told me he deliberately instructed people they could not go on the dock because of "security," and they complied without question. In fact, all he really wanted was to keep people off the dock when a cruise ship arrived.

If you think you can trust the government, ask a Native American or a whale. Our whole struggle against the Trans-Pacific Partnership is about uncontrolled government involvement and deception, aided by excessive corporate interference. Nobody knows how much of the NSA snooping data go into the hands of corporations such as Chase, Citigroup, and Bank of America.

There are always those who are willing to expose government wrong-doing and suppression of freedom. We actually have no assurance that there has been any change in NSA practices since Edward Snowden, Julian Assange, and even Daniel Ellsberg told the public about government secrecy.