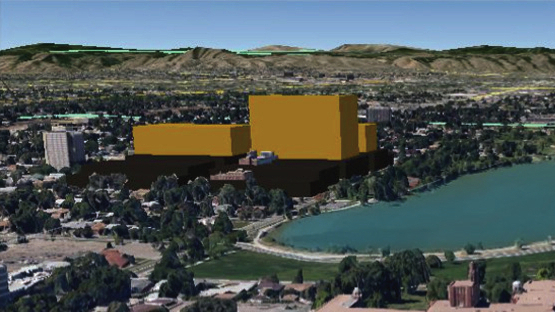 Denver citizens welcome revitalization, but do not support 20 and 12-story buildings by Sloan’s Lake. Tell the Mayor and City officials not to approve the current development plan (GDP), unless it’s modified to include only up to 3-8 story buildings and additional open space. It is NOT TOO LATE if we act today!
The vast majority of input from citizens at the public hearing showed serious concern about the excessive scale of this plan. But the City is choosing not to listen. Tell the Mayor it is not OK to ignore voters. The Mayor has the power to affect positive change before this GDP is approved. Tell him we hold him accountable for good governance and for good development at South Sloan’s Lake. Also, by fixing the GDP now, the Mayor avoids multiple divisive zoning fights over this site for years to come.
Time is running out. Please ask the Mayor for a sensible plan today.
To:
Mayor Michael B. Hancock
Rocky Piro, Executive director, Community Planning and Development
Lauri Dannemiller, Manager, Denver Parks and Recreation
Jose E. Cornejo, Manager Public Works
Susan Shepherd, Councilwoman
I am writing to respectfully ask that you do not approve the South Sloan’s Lake General Development Plan without mandating some key changes.

While I support revitalization, I strongly oppose the current GDP, which includes 20 and 12-story buildings at Sloan’s Lake.

The vast majority of speakers at the Planning Board hearing on 12.18.13 expressed serious concern about the excessive scale of this plan, and its lack of open space. Ignoring taxpayers’ and citizens’ concerns is incompatible with good governance and is not what I as a voter wish to see in Denver.

I respectfully ask that you, and the Development Review Committee, only approve a GDP for South Sloan’s Lake once it has been amended to reflect the following:
– Increased open space from 1.4 to 2.5 acres, to be aggregated along 17th Avenue
– Building heights not to exceed 3 stories on the site’s perimeter
– Building heights in the interior not to exceed 8 stories

These changes reflect citizens’ input, require a modest increase in zoning and are consistent with the extensive St. Anthony’s Redevelopment Task Force Plan.

In addition, the West Highland Neighborhood Association has requested Councilwoman Shepherd to initiate rezoning of this property immediately, to reflect the above points. I support this and respectfully request that you do the same.

Right-sizing the GDP and proactively changing zoning now avoids multiple divisive and costly zoning fights over this site in the future; it provides the predictability that both residents and developers deserve and will be an example of great leadership by the Mayor and City Council.

Thank you for your service.