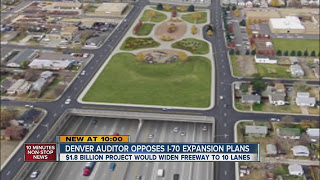 Sadly, last night, at the first of the three public hearings, there were only six people who stood-up to make comments.  But five of the six were in opposition to the planned expansion and four of the six specifically asking for an I-270 & I-76 re-route to be studied.
The guests attending last night were outnumbered about four CDOT people to one guest [our tax dollars at work]. We need more people to attend these hearings and speak-up about why it’s not OK for CDOT to triple the width of the freeway through the middle of communities.
We MUST get people to make good comments.  Tonight’s meeting is in Commerce City and tomorrow’s is in Denver. There will be an open house between 5-6 pm, followed by a formal presentation by CDOT and public testimony between 6-8 pm.
Wednesday, Sept 24, 2014
Kearney Middle School
6160 Kearney St                                 Commerce City, CO
Thursday, Sept 25, 2014
Bruce Randolph Middle School       3955 Steele St       Denver, CO

Below are the comments of a Denver-based architect. He made some incredibly-compelling points when he was one of six people who spoke-up last night.

Consider touching-on some of his points – AND make sure you say you want CDOT to study the I-270 and I-76 re-route before proceeding:
I-70 Widening Scheme Opposition and Loop Alternative Opinions
23 September 2014
Highway projects often include pedestrian and urban design amenities such as landscaped area, pedestrian safety elements, light pollution shielding, and public art.  These amenities often are cut in construction to save money and time while building the project.  The widening I-70 proposal includes an 800’ tunnel with park area above and several smaller tunnel / park crossings over the highway. It also includes lowered areas of roadway, up to 21 feet below grade.  Both of these major amenities will be considered for budget cuts in the most probable, almost certain future of this infrastructure construction project.  The following is my opinion of the I-70 proposed widening solution supported by CDOT and an alternate “Loop” option:
The Widening of the existing I-70 route, which CDOT has proposed has numerous flaws:

The widening of I-70 option causes the destruction of 20 businesses and 53 residences.

The widening of I-70 option has a large citizen or neighborhood opposition contingent.

The widening of I-70 option will cause approximately 5 years of construction detours.

The widening of I-70 option detours will cause massive traffic jams beyond the realm of the existing I-70 traffic jams for the duration of the project, approximately 5 years.

The widening of I-70 option does not currently have enough land for a right-of-way wide enough to work as a 10-lane highway.

The widening of I-70 option does little to alleviate traffic problems for vehicles headed to the overall northern Colorado region surrounding Denver.

The widening of I-70 option will likely cause drainage problems from the highway.

The widening of I-70 option will likely cause ice problems for the eastbound traffic due to winter shadow patterns in the proposed lowered areas of the roadway.

The depressing of I-70 option will likely cause ground water seep into existing contaminated soils.

The widening of I-70 option will generate more harmful fumes, more noise pollution, and construction pollution, for the duration of construction and beyond.
A “Loop” option maximizes the existing 300’+ wide highway right-of ways of highways 270 and 76 while creating new urban infill development opportunities in the vacated areas of the existing I-70 route through Denver and surrounding suburbs. This option has been discussed in the AIA Colorado, Urban Planning Committee, by concerned citizens, neighborhood organizations, and the Urban Land Institute members.

The Loop option can be built without the likely destruction of any businesses or residences.

The Loop option has little if any citizen or neighborhood opposition.

The Loop option has little if any industrial or commercial opposition.

The Loop option can be built while I-70 is operational.

The Loop option has an existing right-of-way wide enough to for a 10-lane highway.

The Loop option improves the neighborhoods and commercial community with continuity that has been missing for 50 years with numerous development options for the vacated viaduct land.

The Loop option needs no connectivity amenities such as tunnel / park space as little neighborhoods or commercial areas will be disturbed by the project.
Regards,
Richard T. Carstens, Principal Architect
Architecture5280, LLC
www.architecture5280.com