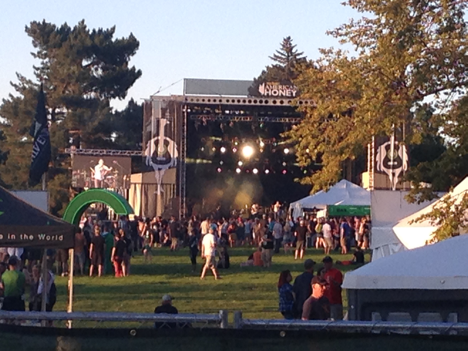 Please note: the following observations and impressions are purely my own, and thus fallible. I do the best I can using a single brain.
Chive Fest ran from 12pm to 10 pm Saturday night, August 16th, on the East Meadow of City Park. I walked around the Park from 1 – 2pm, and only noted sound around the meadow area. The Chive Fest crowd was light at that time, maybe several hundred people.
I returned between seven and eight p.m. on my bicycle, riding around City Park and environs to see how All Phases, the producer of ChiveFest, was doing. My conclusion: pretty well. Now there were probably a few thousand people in the crowd. There were plenty of porta-potties, lots of security, festivities were confined, civil, and organized. I saw several park rangers. Parking spaces abounded, even on 17th Avenue. The sound level was OK and there was no detectable sound to my ears – relative to traffic – in North City Park, West City Park, and Park Hill.  South City Park was on the noisy side, but it wasn’t too bad, and probably not more than a Sunday evening at Jazz Fest. About four blocks between Garfield and Cook seemed to take the noise from the speakers and funnel it to within about a half a block north of Colfax. The zoo animals had to put up with moderate noise, but I guess it was only for one evening.
Steel Panther came on around 7:30, so I stopped near a few small groups of people between Ferril Lake and the west fence around Chive Fest to listen. Steel Panther is billed as a caricature of 80s Heavy metal Bands. They dress wildly in keeping with that genre. I googled  “heavy metal bands of the 1980s” and the top five listed were Metallica, Anthrax, Megadeth, Tesla, and Skid Row. I read up on Heavy Metal bands so that I could better understand how Steel Panther caricatures them. As far as I can figure, it’s through the dress – tough and scary-looking with wild colors. 1980s metal bands dealt with death, alienation, partying, and sex. Steel Panther focuses on the latter two topics.
I was able to hear well from my position, as were nearby people of varying ages standing and walking through the area. There were still plenty of children in the Park; I had just ridden by about ten eight year-old soccer players and their friends and parents. Chive Fest, which had been rocking along innocuously to the casual observer, at that point became a live wet dream for young white guys nostalgic for adolescence, as far as I can figure. Nothing was sacred, especially for anyone who wasn’t a white guy.
The band leader’s patter as he was warming up the crowd consisted of combinations of “fucking, fuck, motherfucker, cocksucker” pretty much two to three times every sentence.
He talked about fucking his whore all afternoon in the hotel room. Asked if everyone was high yet. (Cheers.) “I fucking LOVE Colorado. Cocaine is legal in Colorado.”  He defined Oklahoma pussy for us. (You don’t want to know.) Thank you, Mayor Hancock, for providing beautiful City Park for a backdrop for this monologue.
“Show your boobies!” he would encourage the crowd at frequent intervals.
The band leader observed that he saw a lot of black people in the crowd, then crowed “yo, yo, yo, yo…” rapper style. A few black hands waved rhythmically above the crowd. Next: “You know why black men come to hear a heavy metal band? … To fuck white pussy!!” A few cheers. Thank you, Mayor Hancock.
Next up: Mexican pussy, who the band leader described as really hot. He said he loves Mexican girls because they fuck you all night, then clean your room up in the morning. “They just can’t help themselves.” Thank you, Mayor Hancock.
He introduced one of the band members, riffing that people think he’s gay, but he’s not really. He landed in jail once and was forced to suck cock. Obviously being gay is not OK in the pussy-loving crowd. Again, thanks for offering up City Park for these nature-lovers, Mayor Hancock.
The music’s pretty good; I can’t be equally laudatory about the lyrics. Listen for yourself, and get an idea of the followers’ thoughts here.
From “Party All Day (Fuck All Night)”
Wo-oh-oh, hey, hey, hey. Fuck all night and party all day.
Smoke and drink and screw; that’s all I want to do.
Sang a song about an Asian Hooker. Lyrics available here. Wouldn’t this be more appropriate for Red Rocks instead of a public park peopled by kids and families??
Wow. Yeah, it’s really funny. Maybe if you’re a twenty-something white guy lacking social development, or one of their groupies. “Show your boobies!”
I’m sure there was so much more, if I had only stuck around until ten o’clock.
As I continued around the lake, past Duck Pond and Dustin Redd Playground, I saw several wasted men, stumbling and oblivious.
It was a fascinating tour of the Park. I was surprised because, coming from the post-60s generation of Woodstock fame, counterculture activity seems to me to be part and parcel of being young. I was expecting to be fine with the music. However Chive Fest counterculture messaging strikes me as group masturbation for an in-crowd that excludes minorities, women, and larger-world concepts. I left the park very saddened that the vision of these young people is so narrow and self-indulgent, and that Denver’s Mayor rents City Park – serenely verdant and outrageously beautiful – to propagate such tripe.
And you wouldn’t want me to show my boobies.
(What a moronic term!)