In order to assert our rights, acknowledge our duties, and proclaim the principles upon which our government is founded, we declare: 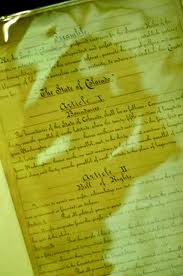 Section 1. Vestment of political power. All political power is vested in and derived from the people; all government, of right, originates from the people, is founded upon their will only, and is instituted solely for the good of the whole.
Section 2. People may alter or abolish form of government – proviso. The people of this state have the sole and exclusive right of governing themselves, as a free, sovereign and independent state; and to alter and abolish their constitution and form of government whenever they may deem it necessary to their safety and happiness, provided, such change be not repugnant to the constitution of the United States.
Section 3. Inalienable rights. All persons have certain natural, essential and inalienable rights, among which may be reckoned the right of enjoying and defending their lives and liberties; of acquiring, possessing and protecting property; and of seeking and obtaining their safety and happiness.
Section 4. Religious freedom. The free exercise and enjoyment of religious profession and worship, without discrimination, shall forever hereafter be guaranteed; and no person shall be denied any civil or political right, privilege or capacity, on account of his opinions concerning religion; but the liberty of conscience hereby secured shall not be construed to dispense with oaths or affirmations, excuse acts of licentiousness or justify practices inconsistent with the good order, peace or safety of the state. No person shall be required to attend or support any ministry or place of worship, religious sect or denomination against his consent. Nor shall any preference be given by law to any religious denomination or mode of worship.
Section 5. Freedom of elections. All elections shall be free and open; and no power, civil or military, shall at any time interfere to prevent the free exercise of the right of suffrage.
Section 6. Equality of justice. Courts of justice shall be open to every person, and a speedy remedy afforded for every injury to person, property or character; and right and justice should be administered without sale, denial or delay.
Section 7. Security of person and property – searches – seizures – warrants. The people shall be secure in their persons, papers, homes and effects, from unreasonable searches and seizures; and no warrant to search any place or seize any person or things shall issue without describing the place to be searched, or the person or thing to be seized, as near as may be, nor without probable cause, supported by oath or affirmation reduced to writing.