Tom Boasberg and a Culture of Deceit

I was so saddened to see voters agree to support Tom Boasberg this last election and provide him with more “bobble heads” ie yes men when we had regular folks running for school board seats who live in the community, and were clearly ready to question the status quo. I guess they didn’t have shiny shoes and a slick story, so they didn’t win. I hope that everyone will think clearer next election and gets some real scrappers to fight this craziness.

In case, you thought it was just me that noticed, take a look at the feature WestWord
article this week. It is as grim as it gets as our experienced teachers are being layed off in droves to fit the new models of low-wage pay for teachers. This is our community and the action of Tom Boasberg is going to hurt us all.
Just this Friday, Friends of Denver Parks sent out an article we found from the Colorado Chalk Beat.

“A perception at Hampden Heights lingers that Rocky Mountain Prep, a high-structure charter school, is a shoo-in for the campus.
The charter’s own actions may have exacerbated those feelings. The school recently posted a job listing for a “Founding School Leader: Hampden Heights Campus.” They have since changed it to the more generic “Founding School Leader: Second Campus.” 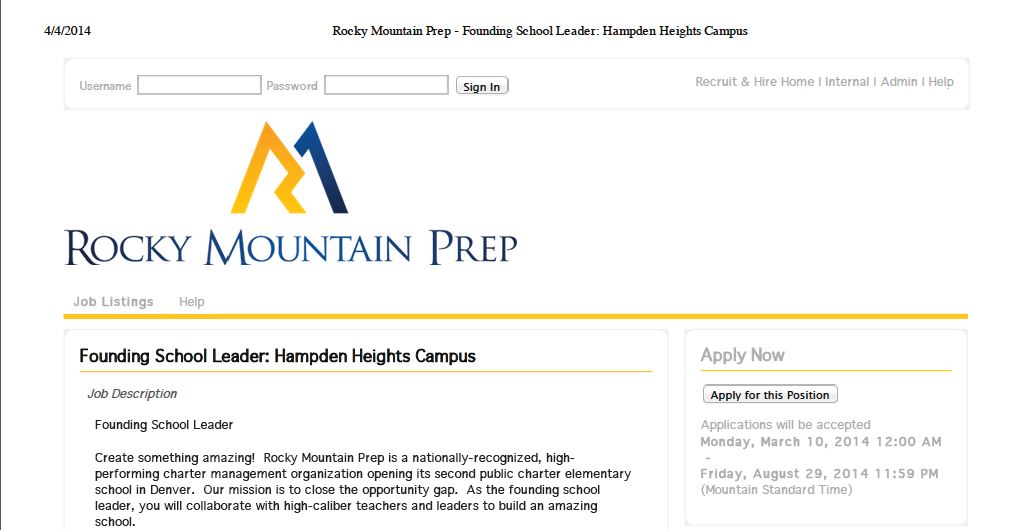 Well, seems this so called perception has some traction even though we’ve been slipping in “it” for awhile now. So for those who were imagining that the contract was already settled behind closed doors this is what we found online. A Job Posting for the new Charter School starting March 10, 2014. I promise, you can’t make this stuff up.

So I really take exception to Anne Rowe’s statement (see below) in reference to the concerns that back room dealing took place and fair process was not followed . BTW “Politicized” is the new buzz word these days. That’s double speak for “the peasants are being noisy and annoying again.”

Anne Rowe quote “Hampden Heights has been in a political realm since the idea [for a new school] came around,” said school board member Anne Rowe, who represents southeast Denver. “That may be part of it.”

“Rocky Mountain Prep’s leaders say that if something’s been decided, they haven’t heard. And the posting went up, they said, to ensure they have a strong leader if they do get approved.”

So hope to see everyone show up and support Friends of Denver Parks for the court trial to win back our so called “undesignated parks,” starting May 19, 2014. I have it on good authority that when John Case gets up to bat, he hits the home runs. We are estimating the trial will last 5 days, so bring your lunch. Sign up for our FaceBook or Twitter as we hope to keep everyone up to date on the proceedings.