from Ean Tofoya via FB: 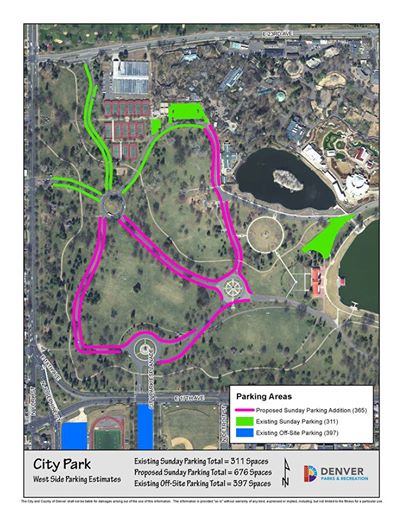 Letter from Parks & Recreation re: Sunday Parking in City Park
Dear Neighbors of City Park –
We would like your input/feedback on a potential operations change we are considering for City Park.
For the past several years, a majority of the park entrances and roads have been closed on Sundays. This dates back to a request that was made by the Denver Police Department years ago when gang issues and violence plagued the area.
Over the years, the social issues in the neighborhood have improved, but the road/gate closures have remained in place. We’ve received some feedback from area residents that this operation procedure has led to increased parking issues in the surrounding neighborhoods on Sundays throughout the year.
We have discussed this with the Denver Police Department and they have given Parks and Recreation their support of re-opening those gates and roads that are temporarily closed on Sundays. In cooperation with DPD, we will monitor the operations change and if there are issues that arise that are a concern to either DPD or Parks we leave open the option to return to how the park has been managed during previous years. By making this change, we estimate it will add 365 parking spaces within City Park on those particular Sundays. I have attached a map of the west side of the park to help understand where the additional parking on Sundays would happen.
This proposed plan to open the gates and roads in the park on Sunday does not include any of the permanently closed roads. We are only proposing to open the roads that are closed on Sundays, but are normally open every other day of the week.
We will still limit access to the area around the Pavilion on Jazz in the Park days, but this opening of the roads (primarily on the west side of the park) on Sunday’s will significantly increase the parking capacity in the park on those days.
Before we move forward with this change, we would like to hear your feedback. Do you support this change or do you have concerns? Please have your constituents email me directly over the next 10-14 days. I will follow-up with you again after that time to let you know what we heard from the collective neighborhoods. In addition, if you would like me to attend one of your upcoming meetings in the next month or so to discuss this change, please email me directly and I will be happy to make time or find another DPR staff member to attend in my place.
Thanks for all your support of City Park,
Scott Gilmore | Deputy Director of Parks and Planning
Parks and Recreation
City and County of Denver
720.913.0665 Phone | 720.837.0489 Cell
[email protected]