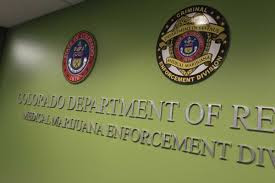 I am writing today to express my deep concern about the MIA status of the promised 2014 follow up Audits of the “F” grade given to Audits of both the MED (DOR) and the CDPHE in 2013. Under the leadership of now disgraced Audit Board president Steve King a vote was taken in 2013 that follow up audits MUST be provided to the legislature with enough time for the 2014 Legislative session to re-act respond and craft policy solutions to unresolved issues from these Audits (a deadline that is sadly 6 months past)… Its no secret I’ve always considered Steve King to be a moron with a Myopic agenda, and lately it looks like my opinion of his integrity turns out to have been optimistic! Lets hope with some new leadership we can get the audit train back on track and complete the promised audits that fell by the way side in 2014. My concerns center on activities at MED that are patently Illegal mainly the fact that the MED is actively encouraging Licensees who are under “investigation” to sell their licenses rather than face criminal charges, once the license has been sold the MED no longer has jurisdiction (nor obligation) to bring charges against the licensee… Furthermore the MED is accepting a paltry transfer fee of $2000 on each license sold in this manner & the change of name fees when they apply. Lowly though the amount seems in comparison to the crimes in question, it is enough cash under Federal law that it in and of itself constitutes a felonious act of participation in criminal behavior surrounding drug sales… If convicted of this felony MED employees would no longer be eligible to work in the Cannabis Industry (top name on the list of who ought to be ineligible is Lewis Koski) The crimes in question of one forced licensee’s (treeline/nedicate/mountain bear) sales concern violations of the volumes submitted to the MED via the MITS system. (we need an audit of the MITS specifically since the MED has claimed ad nauseum that MITS was the only tool law enforcment needed, but many are openly violating & gaming the self reported system and not one lucrative MED funding penalty has been issued basedon MITS data in 2014)… This owner has Seven licenses currently for sale while he is now allowed to operate? I am happy to provide a long litany of violations committed by the owner in question who incidentally was a member (like myself) of the original DOR rules making panel with Matt Cook. WE are certain the litany of complaints has been provided 1st to Laura Harris, and then To Lewis Koski, but even a CORA open records search of these complaints in question comes up empty? Also the MED allowed sale of at least one of the embattled VIP properties in Denver to transfer to a new owner between october 2013 when they were federally raided, and february of 2014 but prior to follow up DEA raids in April of 2014 and the state nor the MED has never pressed charges in the multitude of cases tied to the Uribe/Lazlo Bagi/ DIaz/Furtado clan… Some serious skullduggery is going on at MED & it is my opinion that corruption is much worse than at the time of the 2013 Audit, not better now. Please respond with your timeline for attending to this very important matter, Also do not let my focus on the MED with today’s email lessen the concern or need for the also promised follow up audit of the many problems at CDPHE with the marijuana registry mainly centering on failure to protect patient privacy.